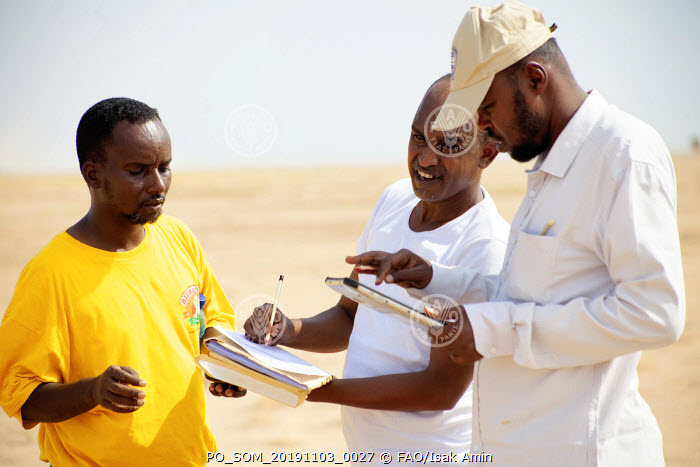 Original filename
PO_SOM_20191103_0027.jpg
Country
SOMALIA
Headline
OSRO/SOM/907/UK: Early Action to protect livestock assets and food sources in Somalia
Caption
03 November 2019, Ceel-gaal, Somaliland - Mohamed Omar (left), Abdirizak Awlia (centre), and Mohamed Said, from the Ministry of Agriculture, speak in Ceel-Gaal village, in Salal region, Somaliland, on Sunday 03 November 2019. The Ministry of Agriculture is monitoring the problem, and digging holes in which to trap the locusts.
Locusts are harmless when solitary, but become voracious when they congregate in groups and become more abundant. Since the beginning of July, swarms of Desert Locust, originating in Yemen, have been invading farmland and rangeland in northern Somalia. These swarms are causing significant losses to crops in Somaliland. Field surveys conducted by the Locust Unit based in Hargeisa, Somaliland confirmed that a new generation of locust breeding has commenced in remote areas in the hinterland. If unchecked, this new generation poses a real risk to crop production throughout Somalia and the wider region. FAO has trained 20 staff from the two Ministries on surveillance, reporting, management and the safe handling, use and storage of bio pesticides. The ministry staff has in turn mobilized affected
communities so they are aware of the danger of this pest and the importance of a community-based early warning approach. Through surveillance and spray operations2, this project has contributed to the protection of approximately 85 000 acres (equivalent to around 34 400 hectares) of cropping land in northern Somalia. As the pest is a threat to both pastoral and farming households, the project will be protecting the livelihoods of entire rural communities.
Photo Credit
© FAO/Isak Amin
Part of