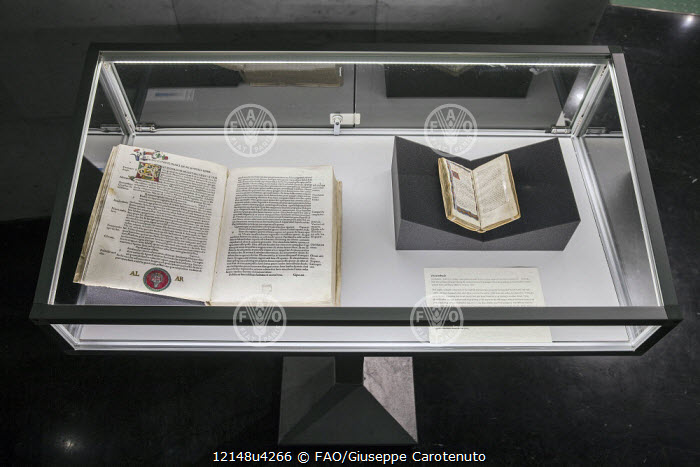 Original filename
12148u4266.jpg
Country
ITALY
Caption
07 December 2017, Rome Italy - Inauguration of the exhibition 65 Years of the FAO Library, 1952-2017. On Tuesday, 5 December, the library exhibition was officially inaugurated by the Director-General. Speeches were held by Enrique Yeves, Director, OCC and H.E. Pierfrancesco Sacco, Ambassador, Permanent Representation of the Republic of Italy to FAO, and Thomas Duffy, Chargé d'Affaires a.i., Deputy Permanent Representative of the United States Mission FAO. The Director-General also launched the publication The story of the FAO Library which documents the more than a century-long history of the Library of FAO and the patrimony of knowledge it conserves for the agricultural community. To celebrate its 65th anniversary the FAO Library exhibits for three weeks a selection of rare books and incunabules (first-ever printed books dating back to 1454 - 1501). The rare books exhibition is part of the year-long exhibition that tells the story of the historic events that shaped the FAO Library, from the International Institute of Agriculture, the predecessor of FAO, until today. FAO headquarters, (David Lubin Memorial Library).
Photo credit must be given: ©FAO/Giuseppe Carotenuto. Editorial use only. Copyright ©FAO.
Photo Credit
© FAO/Giuseppe Carotenuto
Part of