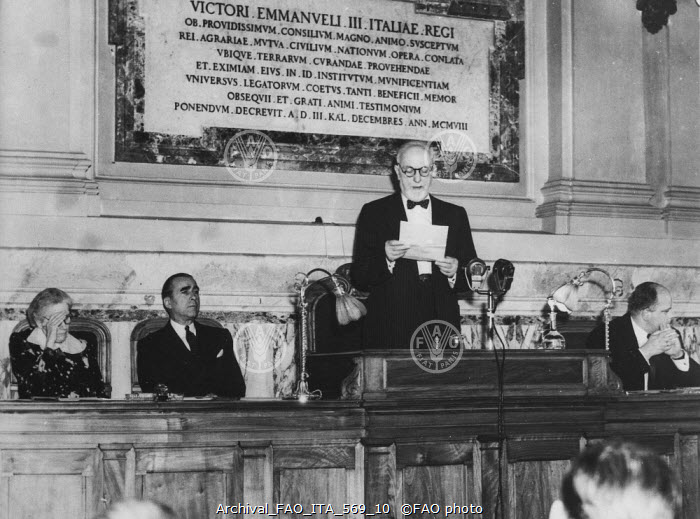 Original filename
Archival_FAO_ITA_569_10.jpg
Country
ITALY
Caption
1949, Rome, Italy - Minister Sforza, Italian Foreign Minister, centre, addressing the audience during the David Lubin Centennial ceremony, held at the FAO European Regional Office in Villa Umberto, former seat of the International Institute of Agriculture (IIA), in Villa Borghese. Minister Sforza is flanked by Mr. A.H. Boerma, Regional Representative for Europe, right, and Ambassador Dunn, left. David Lubin (10 June 1849 - 1 January 1919) was pivotal in the founding in 1904 of the International Institute of Agriculture, thanks to the support of King Victorio Emmanuele III. Opened in May 1908, the Institute's goals were to help farmers share knowledge, produce systematically, establish a cooperative system of rural credit, and have control over the marketing of their products. At the first gathering 40 nations were represented. In 1906, Lubin was appointed the permanent U.S. delegate to the IIA. In 1913 on the occasion of the meeting of the congress in Rome, Mr. Lubin received a silver cup as a token of appreciation of his efforts in originating the organization. By 1919, 53 nations were represented at the IIA gatherings.

The IIA ceased operations in 1945. Several of its assets were transferred to the United Nations' Food and Agriculture Organization (FAO). The mandate of international cooperation in the field of agriculture is continued by the FAO, which named its library in honor of David Lubin. The David Lubin Memorial Library (DLML) maintains the personal archives of David Lubin and the collection of the IIA library. The library was established in Rome at the 1952 FAO Conference, according to the decisions of the 1950 Conference. It was named David Lubin Memorial Library by the Conference to honour the founder of the International Institute of Agriculture (IIA). The extensive IIA collection forms a solid base for the present-day Library, which is considered one of the world's finest collections in food, agriculture and international development.
Photo Credit
© FAO photo
Part of