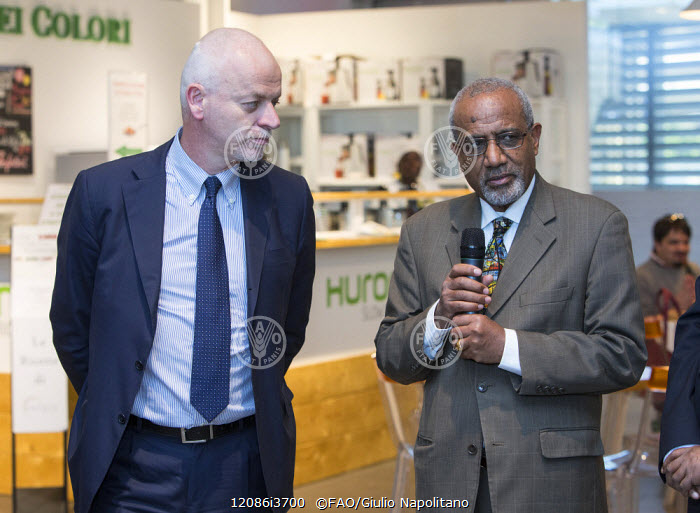 Original filename
12086i3700.jpg
Country
ITALY
Caption
20 April 2015, Rome, Italy - Mulugeta Alemseged Gessese (right), Permanent Representative of the Federal Democratic Republic of Ethiopia to FAO speaking during an event organized to acknowledge the successful implementation of the FAO-Eataly partnership while Lapo Pistelli (left), Vice Minister, Ministry of Foreign Affairs, Italy looks on. The initiative has supported an Ethiopian women's cooperative in the Tigray region of Ethiopia to produce more than 1,500 kg of cactus pear jam in line with Ethiopian and European food safety standards, packaged in 4,000 jars and currently on sale at Eataly in Rome.
The collaboration has allowed Ethiopian women farmers to access international markets and increase their incomes that will allow using the revenues to expand the output and variety of their production.The support for the cooperative and the development of new agricultural products is part of a larger, broader development initiative undertaken in partnership between FAO and the governments of Ethiopia and Italy, to which the Italian Development Cooperation has provided approximately $9 million in funding support over the past eight years.
Photo Credit
© FAO/Giulio Napolitano
Part of