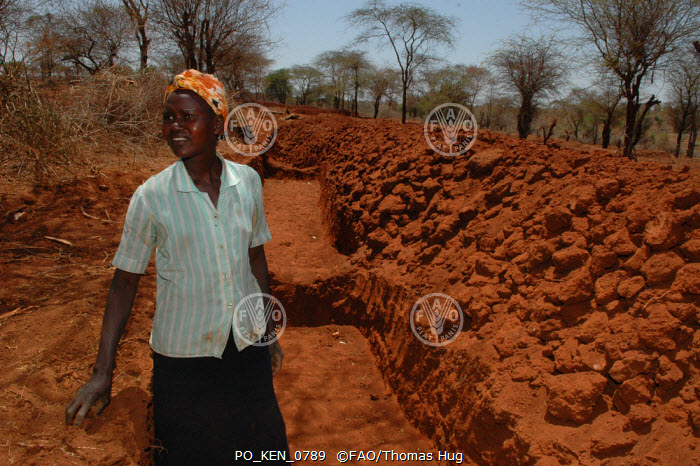 Original filename
PO_KEN_0789.jpg
Country
KENYA
Headline
Horn of Africa Crisis
Caption
24 August 2011, Kyuso - A beneficiary of FAO's voucher-for-work project in drought-prone eastern Kenya. Most people in these arid and semi-arid parts of eastern Kenya survive by farming small plots of land and raising livestock. They depend on the rains to grow food; however, consecutive years of uneven rainfall means farmers have not had a decent harvest for several seasons, leaving them more food insecure and cash poor.
Farmers, working through Farmer Field and Life Schools (FFLS), are terracing at least one acre of their land so that fertile topsoil is not swept away with the rains. Likewise, they are constructing sand dams in dry riverbeds to capture and retain water that would otherwise be lost to runoff. Farmers are given a voucher in exchange for each day of work. Half of the voucher can be redeemed for food at select local traders, while the other half is used to buy building materials for the community sand dams.
Photo Credit
© FAO/Thomas Hug
Part of