One Million Cisterns for the Sahel Initiative 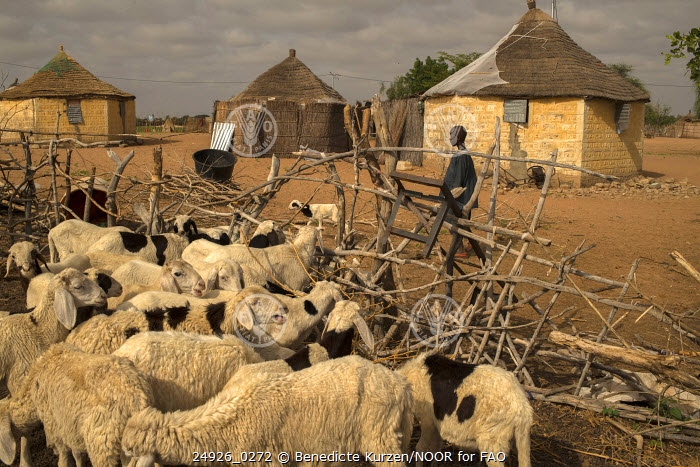 Original filename
24926_0272.jpg
Country
SENEGAL
Headline
One Million Cisterns for the Sahel Initiative
Caption
27/07/2018, SENEGAL, DOULI.
One of the women of Mboya Ka's household help a baby sheep to suck the milk from the mother. In this region in Senegal the Peul people are traditional cattle herders.
Mboya Ka, 50 yo, is the mother and grand mother of a family who has been identified as vulnerable and benefited from the construction of a cistern. she says: " there are more than 10 women in the household. Each of us owns a small patch in the garden. If we had more water we could expand the garden and produce more vegetables. This would be very good for us, so we can both eat more vegetables and also sell them for money."

The 15 m3 cisterns are supposed to provide clean drinking water for a family of 8 people during the dry season(7months) as well as an irrigation supplement for homestead gardening of around 10m3.


The family has been identified as vulnerable and benefited from the construction of a cistern. The 15 m3 cisterns are supposed to provide clean drinking water for a family of 8 people during the dry season(7months) as well as an irrigation supplement for homestead gardening of around 10m3.

The One million cisterns for the Sahel project aims to promote and facilitate the introduction of rainwater harvesting and storage systems for vulnerable communities, especially women. The objective is to enable millions of people in the Sahel have access to drinking water, have a surplus to enhance their family agricultural production, improve their food and nutrition security and strengthen their resilience.

This programme has various elements: the cisterns that collect rain water, cash transfers for beneficiaries building the cisterns, provision of highly nutritious seeds, and tools for gardening, and training in climate smart agriculture, water management, better access to markets through,. In Senegal, 10,000 vulnerable women are directly targeted, who are part of 200-300 women's groups. These women have obtained land rights for the first time and have received one cistern to collect water. Before the project, these communities used to only consume meat, cereals and milk. Now that they have access to water, they can also grow vegetables during the dry season. Surplus vegetables are sold in the market. Kids going back to school now as they don't have to help families and fetch water.
There are 2 types of cisterns ? a 50 cubic metre one for 60 women in a farmers' association 2.5 hours form Dakar, and a further 2.5 hours from there, 15 cubic metre cisterns. Women and children previously walked 4 hours a day to fetch water.
Related url
SEN
Photo Credit
© Benedicte Kurzen/NOOR for FAO
Part of