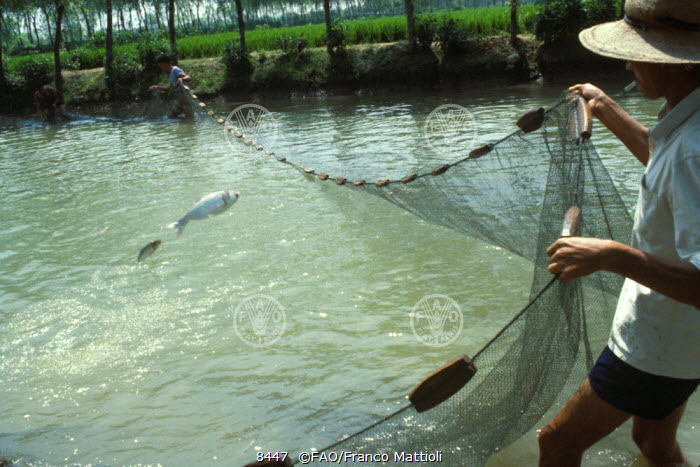 Original filename
8447.jpg
Country
CHINA
Caption
A net is used in the harvest of silver carp at an aquaculture farm in the Hua-Si Production
Brigade. - - General: General. The total number of Communes throughout China has been estimated at 60,000 and 74,000. In Jang Yin County there is a Commune consisting of 26 Production Brigades. One such is the model Brigade of Hua-Si, located some 65 km from Chang-Chow. It is composed of 278 families totalling 1,082 people and working 57 ha. of land. The Brigade? main activities are: land cultivation, forestry exploitation, animal husbandry and small handicraft industries. Before the Liberation this farmland was on rough terrain but now it is completely levelled. Rice and wheat production rose from 7,500 kg. per ha. in 1964 to 20,280 kg in 1977. Cash payments to farmers have been increased and social welfare improvements have been introduced.
Photo Credit
© FAO/Franco Mattioli
Part of