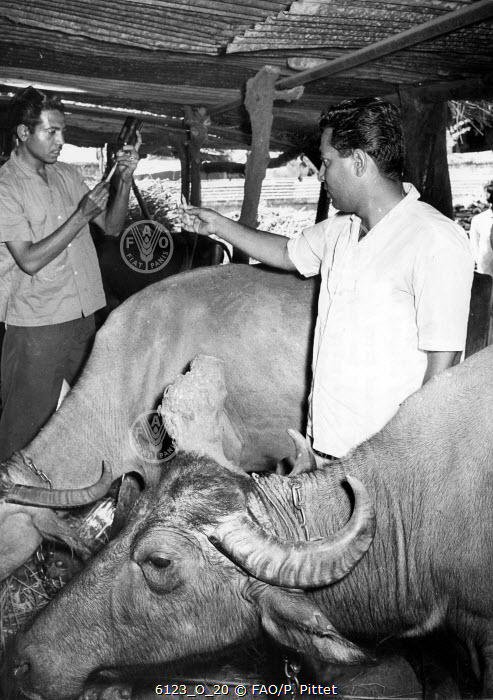 Original filename
6123_O_20.jpg
Country
INDIA
Caption
Anand (State of Gujarat) India, February 1967. The Cooperative has a Veterinary Service for its members, and nearly 30 veterinary surgeons are employed. Here Dr. Chotani, the head of the Service, prepares to vaccinate a buffalo against rinderpest.
The Kaira Dirstrict Cooperative Milk Producers' Union had its small start among farmers who were supplying milk to a contractor for the Bombay Milk Scheme after the war, and from this a large milk and dairy product complex has grown - an example of what can be done when there exists among the people the will to realize an idea, and when to that will can be added technical and financial assistance. Among the agencies that have helped the project are: Oxfam, the Swedish International Development Authority, the New Zealand Government (under the Colombo Plan), the World Food Programme, the Freedom from Hunger Campaign, UNICEF and FAO. The Cooperative is still expanding; it now has 125,000 members owning a total of 150,000 buffaloes. The day the Cooperative's AMUL plant opened in 1948, it handled 225 kgs. of milk: last year it handled nearly 66 million kgs. It also has ancillary enterprises such as an artificial insemination centre, an animal feed-mixing-plant, and veterinary and progeny testing services. The Cooperative has brought prosperity, dignity and meaning to the lives of the small farmers in a large area, and it has also increased India's much-needed supplies of milk and dairy products.
Photo Credit
© FAO/P. Pittet
Part of