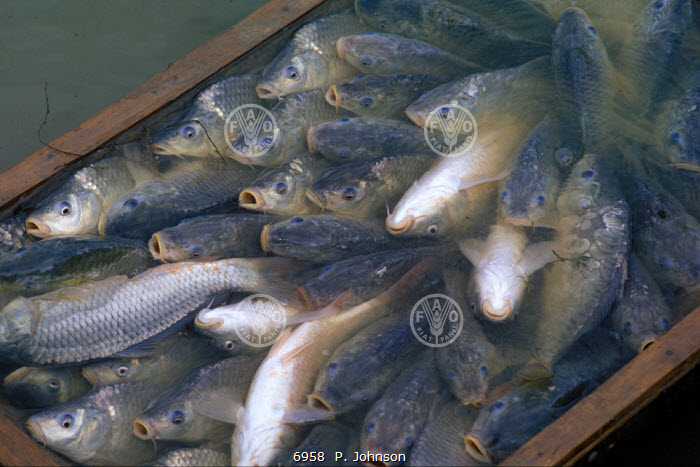 Original filename
6958.jpg
Country
NEPAL
Caption
Carp of good marketable size which have just been harvested from one of the ponds at the Pipley fish culture station in the Hetaura plain. - - Inland Fisheries Development. Due to the scarcity of meat and because of religious restrictions which prohibit eating the meat of certain animals, the average Nepalese diet is lacking in animal protein. However the majority of the population generally accepts and likes fish and poultry. In 1965, the Government asked the United Nations Development Programme for technical assistance, provided through FAO, to establish experimental and demonstration fish culture ponds. Since the inception of the project, seven years ago, the UN/FAO World Food Programme has assisted with the provision of family rations for workers and latterly the FFHC/Action for Development assisted through a donation from Hungary of ducklings and eggs. The technique of fish cum -duck raising includes the following stages: pituitary hormone is injected into the female carp to hasten ovulation; the ova are stripped, artificially inseminated and incubated. The 'hatchlings', reared in special nursery ponds, feed on micro-fauna and flora (plankton). As they grow they are transferred to larger ponds where they develop to marketable size. At the same time Peking ducks are raised in large numbers on the fish ponds. Their manure, abundant in organic compounds,
fertilizes the water, giving rise to dense growth of the plankton upon which
the fish feed.
Photo Credit
© P. Johnson
Part of