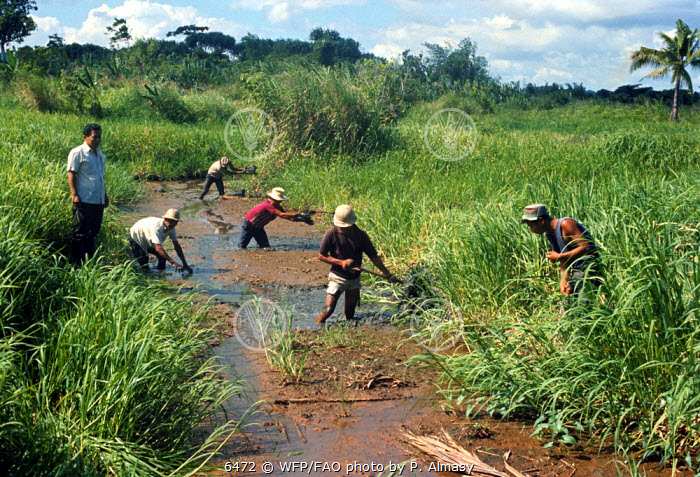 Original filename
6472.jpg
Country
PHILIPPINES
Caption
CONTROL OF SCHISTOSOMIASIS THROUGH AGRO-ENGINEERING METHODS, Philippines, 1973. WFP volunteers clearing part of a waterlogged swamp which is a breeding ground for snails - the intermediate host of schistosomiasis. Increased speed of water-flow inhibits the breeding of snails. Schistosomiasis (Biharziasis) is an epidemic disease caused by parasitic micro-organisms, known as blood flukes, entering human tissue from infected water. The species of this snail-borne disease, ?chistosomiasis Japonicum", is prevalent in several parts of the Philippines where it is a serious health problem affecting more than half a million Filipinos in 19 provinces. After a thorough study on the epidemiology of the disease and the biology of the snail intermediate host, the government has been endeavouring, with assistance from WHO, UNICEF and FAO, to apply the most suitable and economical control measures. Following a pilot project carried out in Leyte province, the most effective controls were found to include drainage and channelling of waterlogged areas, grading of low places and depressions, digging of fishponds, the use of molluscicides and improved agricultural practices to bring down the snail populations and reduce the transmission of the disease. The UN/FAO World Food Programme is providing assistance as an incentive to attract and mobilize male adults from each project area to work on a self-help basis. For each man-day of work performed, the voluteers on this five-year project receive protein-rich rations for themselves and their families at a total cost to WFP of $414,000.