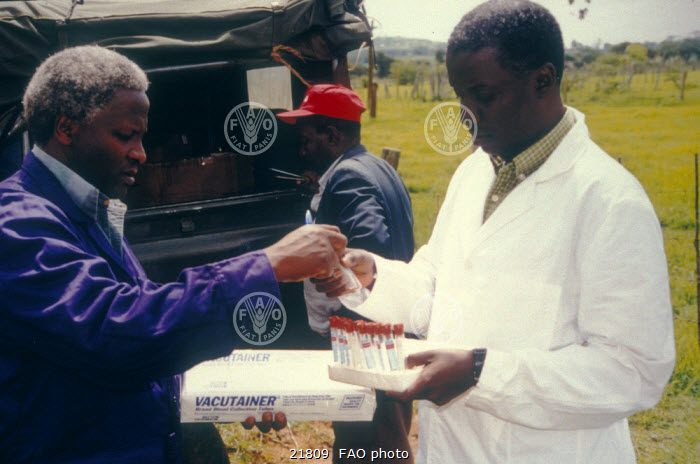 Original filename
21809.jpg
Country
KENYA
Caption
Epidemiologists setting up working equipment ready for blood sampling. - - Emergency Analysis and Control of Rift Valley Fever and Other Vector-Borne Diseases: TCP/RAF/8821. An epidemic of Rift Valley Fever has recently affected livestock and humans across most of Kenya and southern Somalia and a number of other transboundary animal diseases have also gravely affected all the livestock species. Because of the implications of this emergency on the welfare and food security of the human populations in the areas (which are dependent on livestock for their sustenance) and the risk of expansion of the area affected by the complex of animal disease, action was taken to insert animal health components into appeals for humanitarian aid for the worst hit areas.

The main project objectives are: the assessment of the situation in the region the geographical extent and gravity of diseases occurring in different parts of the affected areas; a subregional capacity for early reaction through the training of key persons in systems for diagnosis and targeted surveillance of vector-borne viral diseases, (emphasizing the principles of early warning), and a broad regional awareness of the need of preventive action.
Photo Credit
© FAO photo
Part of