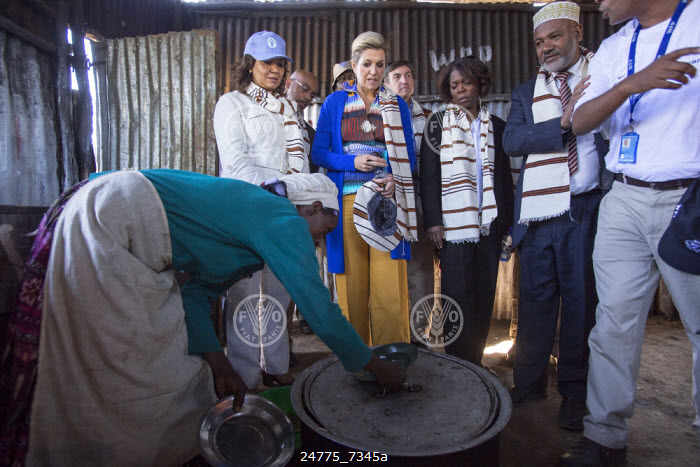 Original filename
24775_7345a.jpg
Caption
Ethiopia, December 10, 2013, Shelfo Village, Awasa Zuria Woreda, Sidama Zone, SNNP region. Photo:©FAO/IFAD/WFP/Petterik Wiggers left to right: Maria-Helena Semedo, Deputy-Director-General of the UN Food and Agriculture Organization(FAO), HM Queen Maxima, Ertharin Cousin, Executive Director of the UN World Food Programme (WFP). On the right the vice president of SNNP region and government rep Sani Redi Ahmed. Mr. Ahmed is also Director of Agriculture for SNNP).
QUEEN MÁXIMA AND SENIOR UN OFFICIALS VISIT ETHIOPIA AND TANZANIA TO HIGHLIGHT THE ROLE OF FINANCIAL INCLUSION IN IMPROVING THE LIVES OF RURAL POOR ADDIS ABABA - Her Majesty Queen Máxima of the Netherlands and the three food agencies of the United Nations are teaming up to raise awareness of how access to financial services - such as bank accounts, short-term credit, small loans, savings and insurance - can help improve the lives and livelihoods of smallholder farmers and the rural poor. Queen Máxima joins the visit in her capacity as UN Secretary-General's Special Advocate for Inclusive Finance for Development (UNSGSA). She arrived in Addis Ababa today at the start of a five-day trip to Ethiopia and Tanzania, together with Ertharin Cousin, Executive Director of the UN World Food Programme (WFP), Maria-Helena Semedo, Deputy-Director-General of the UN Food and Agriculture Organization(FAO), and Adolfo Brizzi, the Director of Policy and Technical Advisory Division at the International Fund for Agricultural Development (IFAD). On Wednesday, the group is scheduled to travel to Dar es Salaam, Tanzania, where they will stay until 13 December. Queen Máxima and the senior representatives of the three Rome-based UN food agencies -FAO, IFAD and WFP - will meet in both Ethiopia and Tanzania with senior government officials and high officials of national and international financial organizations. During field trips in both countries they will meet rural community members and smallholder farmers and discuss how expanding access to financial services can help farmers to manage irregular cash flows and respond to external shocks such as drought and flood, invest in capital to improve their productivity, reach markets and access insurance to mitigate risks of crop loss. The UNSGSA and the three food agencies are working together with governments and the private sector to extend financial services to marginalized groups, especially women, who often face legal and policy barriers, as well as disproportionate obstacles to services, training and information. Greater financial inclusion can also help increase the success of small producers who are not served by microfinance, but are also often perceived as 'too risky' by commercial banks. On Thursday, 12 December, Queen Máxima will give the keynote speech during the launch of the National Financial Inclusion Framework at the Bank of Tanzania. A press conference will follow this event. Press briefings of the four UN organizations will be held in Add
Photo Credit
© FAO/IFAD/WFP/Petterik Wiggers
Part of