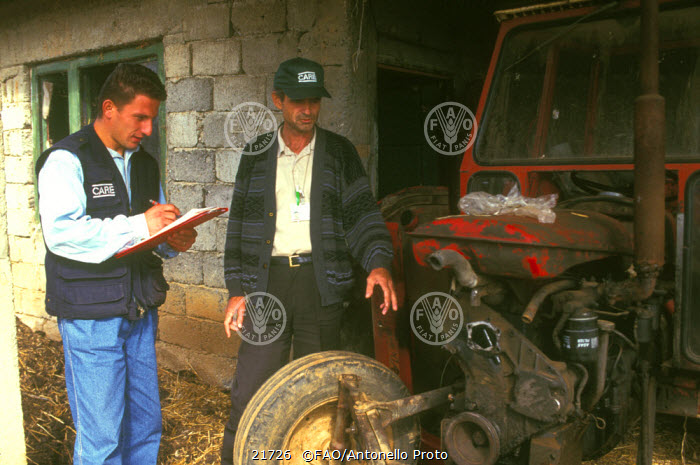 Original filename
21726.jpg
Country
SERBIA
Caption
Experts from CARE, an international non-governmental organization, examining tractors, many of which were damaged during the civil war. FAO plans to start a programme to renovate and repair agricultural machinery in Kosovo as more than 50% of tractors in the country were stolen of destroyed during the conflict. FAO has therefore launched an emergency appeal for further agricultural assistance for USD 25 million. - - FAO Emergency Relief Project for the Balkans. A USD 6.7 million emergency relief project for the distribution of seeds and fertilizers in the Kosovo province of the Federal Republic of Yugoslavia was coordinated by the Food and Agriculture Organization of the United Nations (FAO). Approximately 14 500 metric tonnes of winter wheat seeds and 9 000 mt of fertilizers were handed out to more than 70 000 farming families in the Balkans. The planted area in the 1999/2000 winter season estimated at about 70 000 hectares, of which 46% comes from relief inputs.