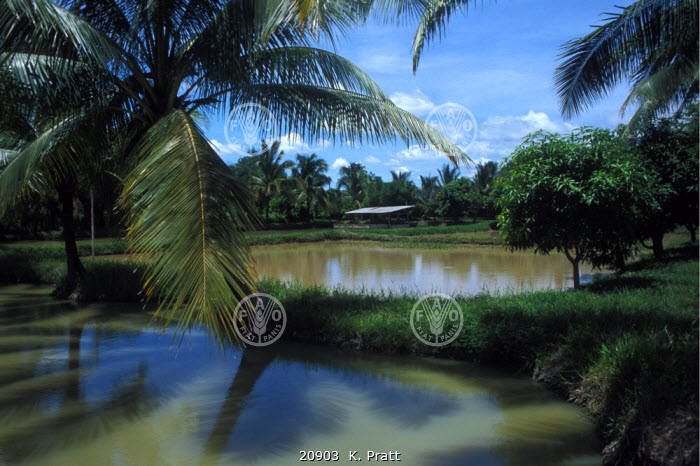 Original filename
20903.jpg
Country
LAO PEOPLE'S DEMOCRATIC REPUBLIC
Caption
Fish farm. This farm was gradually converted from rice paddy to aquaculture over an eight-year period. Originally the farmer received training through a previous FAO aquaculture project. The ponds were diverted from rice paddies by digging deeper and raising the walls. Water is obtained by rainfall or from the canal. The farm has about 1.5 hectares of ponds which are 1.5 metres deep at the end pf the rainy season. They still become very shallow in the dry season, hampered by the prohibitive expense of a pump. - - LAO/97/007. This aquaculture development project is committed to working with farmer groups. The project is designed to advise on the potential for aquaculture in the different agro-climatic areas of Laos. Aquaculture techniques include: pond culture of fish; rice-fish culture; hatchery development. The following activities, which vary between provinces, have been conducted: surveys; workshops; training of farmers groups; improvement of fish hatcheries; and evaluation of extension activities.

The method of increasing the amount of fish produced from rice fields is to directly stock fish fingerlings (rice-fish culture). Other changes are also necessary to ensure increase production, such as managing water levels and providing refuge areas by raising the walls of
Photo Credit
© K. Pratt
Part of