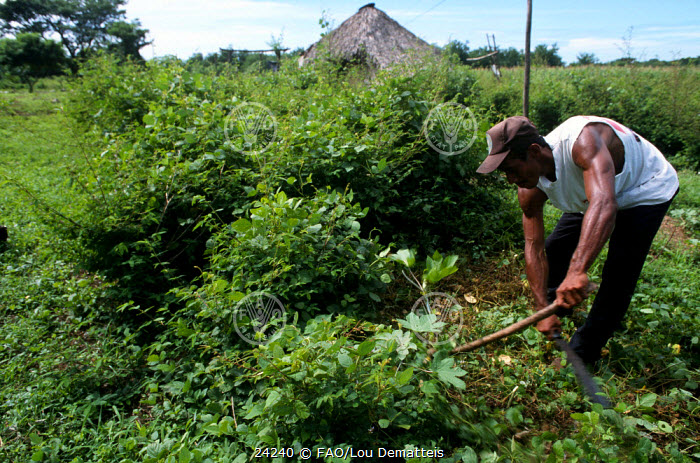 Original filename
24240.jpg
Country
NICARAGUA
Caption
Nicaragua - Project beneficiary Wilbur Parrajon uses a machete to clear weeds and brush to give room to newly planted citrus trees and to provide space for fire maintenance. The citrus trees were planted as part of the agro-forest component of the project and Parrajon is paid for his work in fire protection. In the background of some of the shots are his house and wife and child.
FAO Project UTF/Nic/028/Nic Rehabilitation of four micro water basins (microcuencas) affected by Hurricane Mitch in the municipalities of Posoltega, Quezalguaque and Telica in northwestern Nicaragua. The purpose of the project is twofold: to mitigate the damages inflicted by Hurricane Mitch on the natural resources and environment of the project areas and to contribute to improving the incomes of the beneficiaries as well as improving their food security. The project envisions rational micro water basin management with the participation of local governments, institutions of state, NGO's and local producers in an organized form that will be economically sustainable. The object of the project is to contribute directly to the easing of the situation of social and environmental risk of 400 families considered most affected by Hurricane Mitch and to reduce the future environmental vulnerability of the four micro water basins. The project provides employment to the project beneficiaries and consists of various components. They include reforestation, rehabilitation of land, protection from wild fires, soil conservation, forest industry production and road improvement. The photos submitted were all taken in Micro Water Basin Number IV that is in the Municipality of Quezalguaque. Basin IV contains 100 of the 400 project families. The project area as a whole was severely affected by mudslides from the Casita Volcano that left 1 600 people dead. Micro Water Basin IV was severely affected by volcanic rock and gravel which was washed down from the Telica Volcano.
Photo Credit
© FAO/Lou Dematteis
Part of