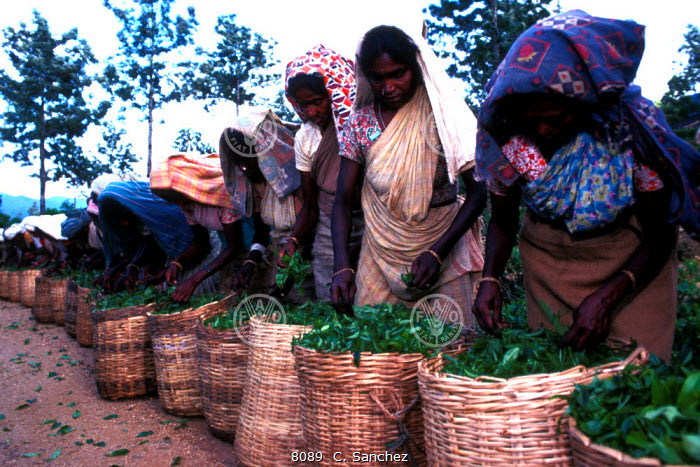 Original filename
8089.jpg
Country
SRI LANKA
Caption
Picking tea at the Pattiyagama cooperative farm in the central highlands near Kandy. The cooperative receives WFP assistance. - - World Food Programme Assistance to Sri Lanka. The island of Sri Lanka (formerly Ceylon) is included in the UN's list of
25 developing countries most seriously afflicted by economic difficulties. Sri Lanka's economy has been hit by a drop in wor1d prices of the island's traditional export crops such as tea, rubber and coconut products. At the same time, food staples for the ever-increasing population have to be imported at today's rising prices. For many years Sri Lanka has maintained a high standard of education, but this has had the effect of drawing young people away from the land, thus creating serious problems of unemployment in the large cities and towns. In addition, the northern region of the island has been in the grip of severe drought throughout most of the 1970s. The UN/FAO World Food Programme is assisting the Government in its various attempts to solve these problems. Foodstuffs are distributed as incentives or as aid to people involved in WFP projects in Sri Lanka. The projects include food assistance for the settlement in country areas of unemployed youth, food aid to colonists, the rehabilitation of village tanks (reservoirs), food assistance to newly established cooperative farms, and rural works programmes in drought-stricken areas.
Photo Credit
© C. Sanchez
Part of