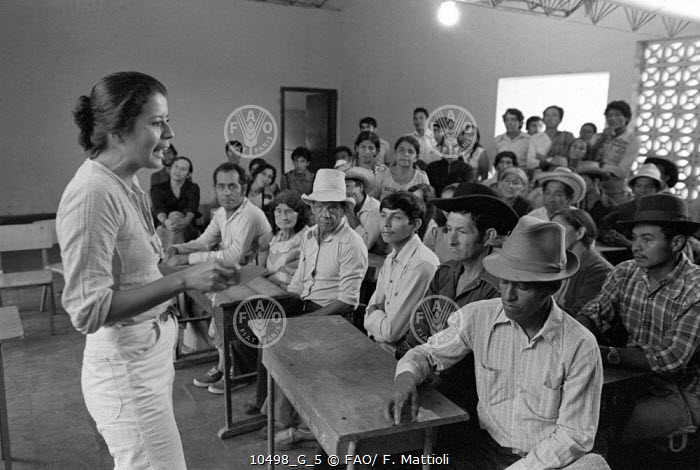 Original filename
10498_G_5.jpg
Country
COLOMBIA
Caption
REHABILITATION OF SMALL FARMERS THROUGH INTEGRATED RURAL DEVELOPMENT?,
Colombia, December.1980. The UN/FAO World Food Programme (WFP) is
assisting the Government?s programme of Integrated Rural Development
(in Spanish, DRI) which, in conjunction with the National Food and
Nutrition Plan, is aimed at increasing agricultural production and
improving the general welfare of rural populations. The WFP $8.9 million
project started in August 1980 and is providing, over five years, 16,500
tons of wheat flour, vegetable oil, pulses and dried skim milk for
distribution to small farmers with plots of less than 5 ha in five region
identified DRI as having a high concentration of small farmers and
possibilities foe expanded production . Each beneficiary gets daily WFP
food rations for himself and four family members for an average of 240
days per year for two consecutive years: a total of 2,400 rations. The
40,000 beneficiaries pay 30% of the local value of the rations they
receive, and the money thus accrued is being used by DRI to finance
basic infrastructure works in the selected areas.
Pilar Rodriguez, WFP/DRI coordinator for the province of' Cauca, addresses
farmers of Balboa, a village some 140 km from Popayan, the provincial
capital. These farmers benefit from WFP/DRI assistance.
Photo Credit
© FAO/F. Mattioli
Part of