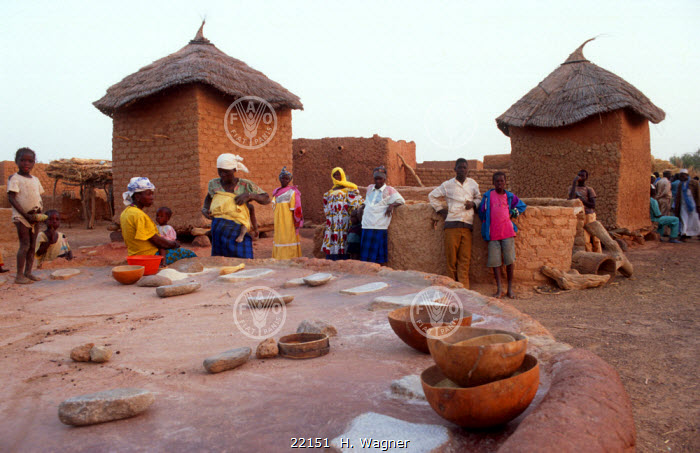 Original filename
22151.jpg
Country
BURKINA FASO
Caption
Stones are used for grinding grain in a local community settlement. - - Forestry and Food Security in Sahelian Africa: GCP/RAF/303/ITA. In the last few decades, the countries of the Sahel have had to face increased degradation of natural resources, characterized by a reduction in land available for cultivation and a decrease in agricultural production, which has led to a deterioration in food security for the rural communities. In Burkino Faso, land degradation has caused the population to migrate from the north to the south of the country and the terrain in the south is now showing signs of erosion and over-cultivation.

The project, financed by the Italian Government and executed by the Food and Agriculture Organization of the United Nations (FAO), aims to foster the growing contribution of the forestry sector in improving food security. The project initially concentrated on developing training activities and courses, monitoring rural development and setting up micro-projects in two villages. A participatory approach has been adopted, helping the rural populations to protect and manage their resources, with emphasis on communication, monitoring and evaluation and people's participation.
Photo Credit
© FAO/Horst Wagner
Part of