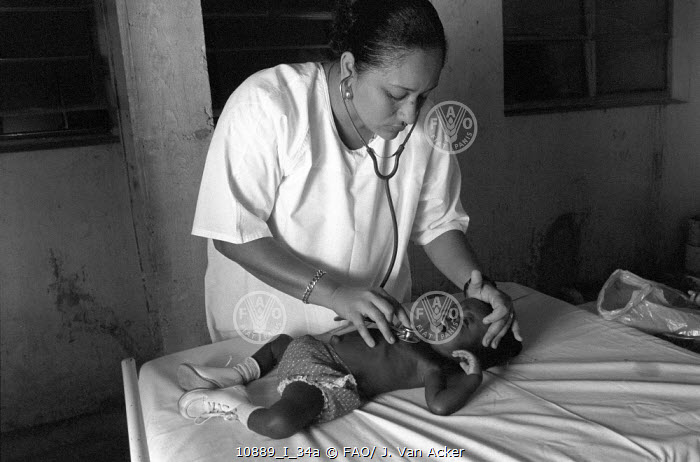 Original filename
10889_I_34a.jpg
Country
HAITI
Caption
WFP ASSISTANCE TO RURAL DEVELOPMENT AND VULNERABLE GROUPS - Haiti, 1981
One of the world's poorest countries, Haiti is a small, largely rocky
and mountainous island in the Caribbean. Agriculture is the most
important sector with about 80 percent of its 5.5 million people living
in rural areas. Over-cultivation of marginal lands due to population
pressure has led to extensive soil degradation. Forests, which 150 years
ago covered 70 percent of the country, have been largely destroyed, and
only 7 percent of the land is now forested. The UN/FAO World Food Programme
(WFP) began assisting the Haitian government with food aid in 1969, and
since then has supplied $28 million to assist projects for rural development,
vulnerable groups, functional literacy and hospital feeding.
Malnourished baby girl being examined by a doctor at the Port-au-Prince
hospital where she gets medical aid and WFP supplementary rations. Her
mother is unemployed with two older babies.
Photo Credit
© FAO/J. Van Acker
Part of