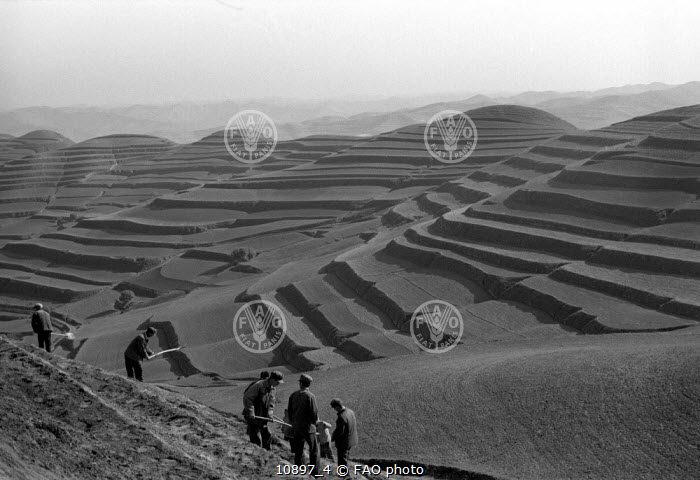 Original filename
10897_4.jpg
Caption
WFP SUPPORT TO FORESTRY DEVELOPMENT, China 1983. The UN/FAO World Food Programme (WFP) has as yet only a short history of working in China, but already it is second only to the World Bank group in the amount of development resources it has made available and its operations continue to expand. By the end of 1983 WFP was operating in 17 different provinces and autonomous regions and had approved support tor a further 20 different projects for which it committed some $200 million worth of food, mainly tor use as "food: for work" rations. Among these projects is the national conservation plan which encourages tree planting and pasture development in 11 provinces of north, northeast and west China. The target is the planting of six million hectares of trees between 1980
1990. Well-tended agricultural contours in Xiji County. WFP assisted members of Gong Yi Peoples Commune (left foreground) prepare a steep hill slope for tree planting as protection against erosion. WFP photo by M. Cherry
Photo Credit
© FAO photo
Part of