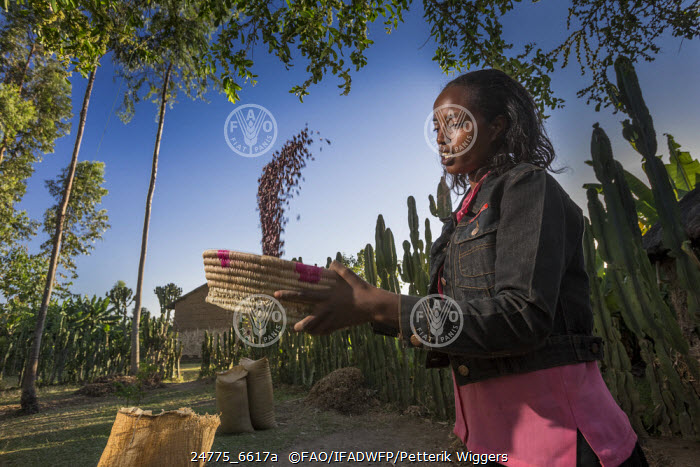 Original filename
24775_6617a.jpg
Country
ETHIOPIA
Caption
06 December 2013, Hangachafa Village, Hawassa (Awasa Zuria Woreda, Sidama Zone, SNNP region), Ethiopia - Mabrat Eyiso sifts beans from dirt, dust and hay. The hay is given to his cows to eat. FAO provided the seeds. The beans harvested from the seeds are sold to the cooperative that is supported by IFAD and WFP. FAO and WFP are jointly implementing the Purchase from Africans to Africa project. The objective is to improve food security and income generation activities of smallholder farmers by promoting local food production using the demand for food from the local schools. WFP is responsible for purchasing food produced by FAO-supported smallholder farmers' organizations. The project has distributed seeds to farmers on credit basis and each farmer has started to return 25kg of beans as seed to disseminate to the other non-beneficiary farmers as a multiplication effect.The food procured is distributed through WFP's school meals programme, reaching more than 8,000 students in 7 primary schools in the district.
Most of Henok's nine children attend classes at the WFP supported Anja Chefa school. Farmers grow beans for three reasons; home consumption, to produce next year's seeds and to sell beans at the market. Henok says from 400 kgs of harvested beans, 250 kgs is sold at the market, 100 kgs is for home consumption and 50 kgs will be the seeds for next year's planting. FAO, IFAD and WFP work closely together in Ethiopia. The Southern Nations, Nationalities, and People's Region (SNNPR) is one of the nine administrative regions of Ethiopia, with Hawassa the capital. The SNNP region has a population estimated at over 16 million people and the majority -- 90 percent -- are smallholder farmers living in rural areas. With 136 Woredas, the region mainly produces maize, haricot beans, teff and coffee, while various populations are agro-pastoralists and pastoralist.
The projects supported by IFAD, FAO and WFP provide an array of complimentary support to small-scale farmers and cooperative unions. Food-security interventions are boosting access to some basic financial services, including bank loans, which were previously unavailable to agricultural cooperative unions and their members. Increased access to those services is, in turn, helping the farmers build a more food-secure future for themselves and their families. Her Majesty Queen Máxima of the Netherlands (UN Secretary General Special Advocate for Financial Inclusion, UNSGSA) and the three food agencies of the United Nations are teaming up in Ethiopia and Tanzania to raise awareness of how access to financial services - such as bank accounts, short-term credit, small loans, savings and insurance - can help improve the lives and livelihoods of smallholder farmers and the rural poor.
Photo Credit
© FAO/IFAD/WFP/Petterik Wiggers
Part of