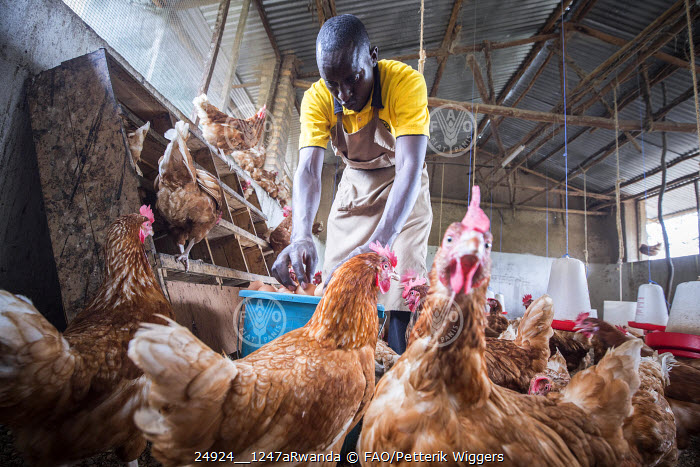 Original filename
24924__1247aRwanda.jpg
Country
RWANDA
Headline
FAO project GCP /SFE/001/MUL - Promoting Nutrition Sensitive Agricultural Diversification to Fight Malnutrition and Enhance Youth Employment Opportunities in Eastern Africa.
Caption
08 February 2018, Gikonko sector, Gisagara district, Southern Province, Rwanda - Gashema Victoire working in his poultry farm.
Once unemployed, now an employer. Gashema Victoire, lives in Gikonko sector, Gisagara district, Southern Province. At the age of 28, Gashema had a dream of becoming an established entrepreneur. After completing his veterinary course three years ago, he started looking for a job to kick start his life.
Gashema was selected to in the project which started in January, 2016.
Through the project, beneficiaries were each given 330 laying hens, equipment and feed and materials for building poultry sheds.
The purpose of the project was to create job opportunities for youth and to improve nutrition and provide supplemental income to poor households through poultry and aquaculture value chain
The Rwandan poultry component of the African Solidarity Trust fund project GCP/SFE/010/MUL-, launched in Kigali in November 2014 began the official distribution of the layers in December 2015 in the areas of intervention of Bugesera in the Eastern Province, Gakenke in the Northern Province, Gisagara and Ruhango districts in the Southern Province. This component is benefiting two categories of stakeholders:
The project is directly supporting 225 beneficiaries including 25 rural youth (10 women and 15 men) that were unemployed or underemployed in the age cohorts 18-35 years and 200 rural vulnerable households (HH) mainly women-headed who were grouped into eight groups to establish poultry farm units for egg production. This is currently the young farmer's first full-time employment. For the women, this is a part-time occupation as they attend to other household chores and the aim is to improve their families' nutrition by adding eggs in their diet. Each group of 25 women received 425 layer hens.The programme aims at creating decent employment opportunities for youth (men and women) in the agricultural sector in order to: (i) improve their income and own access to food; (ii) increase the availability of locally produced eggs and fish, and improve access for vulnerable children through school feeding programmes as well as households; and (iii) increase the overall productive capacities of both the poultry and aquaculture value chains.

The project contribution is in the form of start-up production input kits (Construction of 16 poultry sheds, Supply of poultry sheds equipment, Supply of pullets aged of 3.5 months, Supply of of feeds for 4 months and Supply of veterinary medicines) and intensive training with technical assistance backstopping missions from FAO SFE and HQ to train the young farmers in multifaceted technical aspects including mentoring on entrepreneurship, business and nutrition.
After one year, it is clear that this program has a very high level of achievement due to the interest of the beneficiaries and governments because of the yields and income resulting from the first cycle of production.
In this area of impro
Photo Credit
© FAO/Petterik Wiggers
Part of