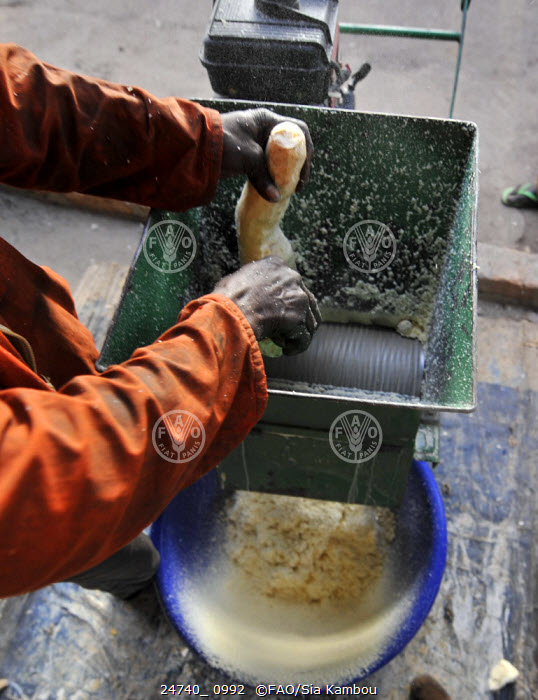 Original filename
24740_ 0992.jpg
Country
CHAD
Headline
Food Security in Chad
Caption
21 March 2012, Niamy, Chad - 21 March 2012, Niamy, Chad - Grinding fresh cassava for eventual processing into other cassava products (flour, paste, etc).
FAO Project TCP/CHD/2903: Intensification of cassava plant production (roots and tubers). The general objective of the project is to improve food security and the nutritional level of the population through a longterm intensification of the yield of cassava roots and tubers. The overall aim of the project is to increase the income of both women and young adult farmers through the following means: -Improved agricultural inputs supply sources to farmers for an increased production level; -Creation of small work groups serving as models for dispersal of technology and organizational methodologies for agricultural production; -Establishment and reinforcement of partnerships between rural young adult and women farmers to ensure longevity and economic viability of the initiated actions; -Consolidation of practical methods allowing more involvement of partners in the development (silent partners, NGOs, Civil Society, Cooperation Agency) of financing and general implementation of the outlined methods to guarantee the planned outcome; -Appointment, at the outset of the project, of a young professional officer capable of gathering and consolidating information on the performance of various cassava roots and tubers for eventual inclusion in the HORTIVAR data base of FAO.
FAO Project TCP/CHD/3201: Supplying agricultural inputs to vulnerable population within the framework of ISFP. To improve food security of internally displaced persons and vulnerable households by reinforcing agricultural production capabilities.
FAO Project TCP/CHD/3301: Support to integrated cassava production management. The objective of the project is to give technical support to the production and protection of cassava crops. The project serves for capacity building amongst villagers and to develop a cohesive community around the cultivation of improved varieties of cassava.
Photo Credit
© FAO/Sia Kambou
Part of