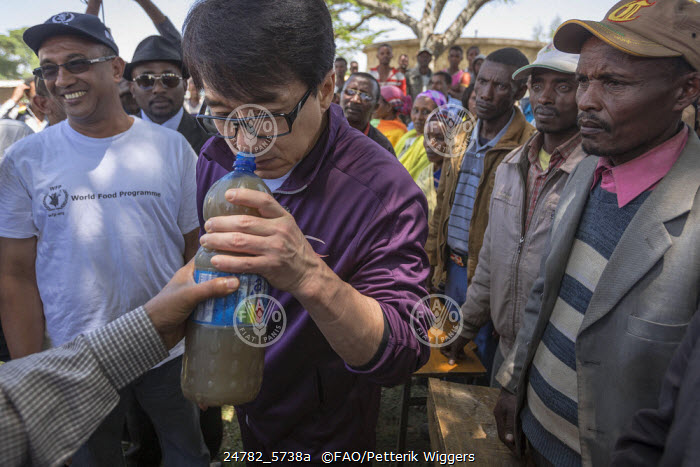 Original filename
24782_5738a.jpg
Country
ETHIOPIA
Caption
21 March 2014, Hawassa, Ethiopia - Jackie Chan talks to farmers about improvement of the crops. The water bottle shows the quality of the water locally. Official visit of Jackie Chan and Peace and Love Season Delegations in Ethiopia.
Hanja Chefa primary school was established in 2003 with initially 340 students (24% girls). Since the start of the school feeding programmes, the number of school children has increased to 1,334 (51% girls). Attendance reached 95 percent in 2012 and drop-out rates of 7% for girls and 9 percent for boys. These rates are lower than the national standards of 14.6% for girls and 13% for boys.
The project provides an array of complimentary support to small-scale farmers and cooperative unions. Food-security interventions are boosting access to some basic financial services, including bank loans, which were previously unavailable to agricultural cooperative unions and their members. Increased access to those services is, in turn, helping the farmers build a more food-secure future for themselves and their families.
Photo Credit
© FAO/Petterik Wiggers
Part of