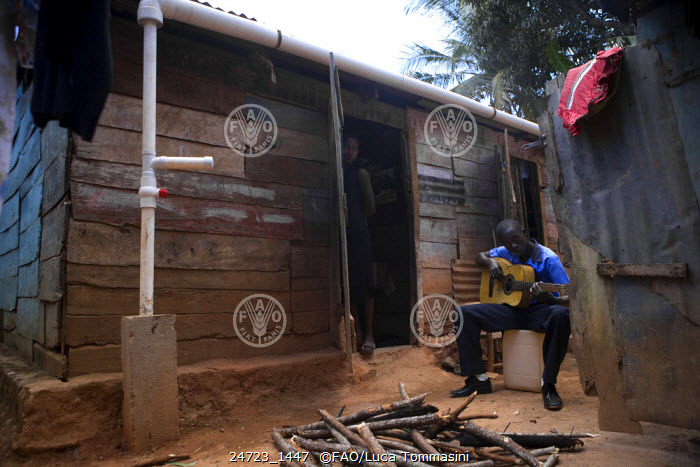 Original filename
24723_1447.jpg
Country
HAITI
Headline
EUFF in Haiti
Caption
22 March 2011, Mont-Organisé - A beneficiary of the FAO project standing in the doorway of her home while her son plays guitar. On the left the gutter system for collecting rainwater can be seen. The project oversaw the construction of 732 cisterns for domestic water as well as gutters to collect rainwater.
FAO Project: GCP /HAI/024/EC - Support to food security and livelihoods of rural people affected by raising prices, the rehabilitation of the environment and support sustainable management in Haiti. Three quarters of Haitian population suffer from extreme poverty and chronic food insecurity. FAO is working on a two-year EU Food Facility project launched in May 2009, to support the government's strategy to improve the food security and livelihoods of some 300 000 rural households living in the country's north-eastern province. The aim is to contribute to the growth and diversification of agriculture, livestock and agro-forestry and improve natural resources management for the municipalities of Fort Liberté, Capotille, Ouanaminte, Ferrier, Mont-Organisé.
Photo Credit
© FAO/Luca Tommasini
Part of