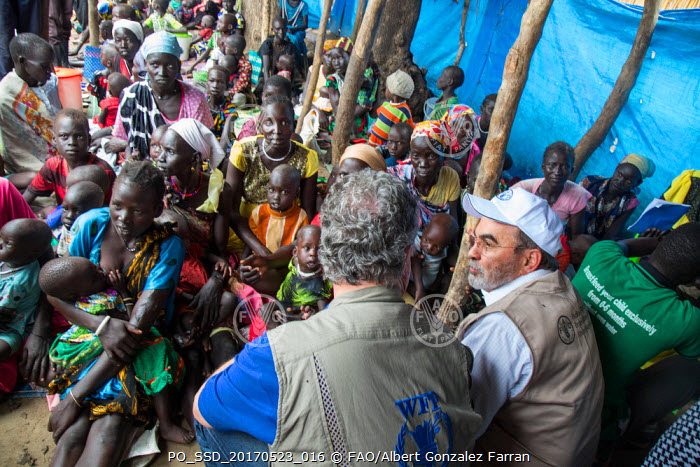 Original filename
PO_SSD_20170523_016.jpg
Country
SOUTH SUDAN
Caption
23 May 2017, Ganyiel South Sudan - (Right to left) The Director-General of the Food and Agriculture Organization of the United Nations, José Graziano da Silva, and the Executive Director of the United Nations World Food Programme (WFP), David Beasley, talk with women and children in a nutrition centre run by the International Rescue Committee in Ganyiel, Unity region, South Sudan. The visit is part of the two-day joint mission of WFP and WFP directors in South Sudan to assess the humanitarian situation in the country. Ganyiel, in Panyijiar county is fully controlled by the opposition forces since the civil war broke out in South Sudan in December 2013. Thousands of people are currently displaced, mostly due to the conflict and the hunger in Unity region. While Leer and Mayendit, both also in Unity state, have been recently declared in famine, Panjiyiar is also in high risk. The malnutrition is very critical, with rates above 30% and Ganyiel has the only stabilisation in all central and southern Unity region.
FAO HANDOUT PHOTOS FOR MEDIA AND OFFICIAL USE. TERMS AND CONDITIONS: PHOTO CREDIT MUST BE GIVEN: ©FAO/ALBERT GONZALEZ FARRAN. EDITORIAL USE ONLY. NO COMMERCIAL USE OR ADVERTISING.
Photo Credit
© FAO/Albert Gonzalez Farran
Part of