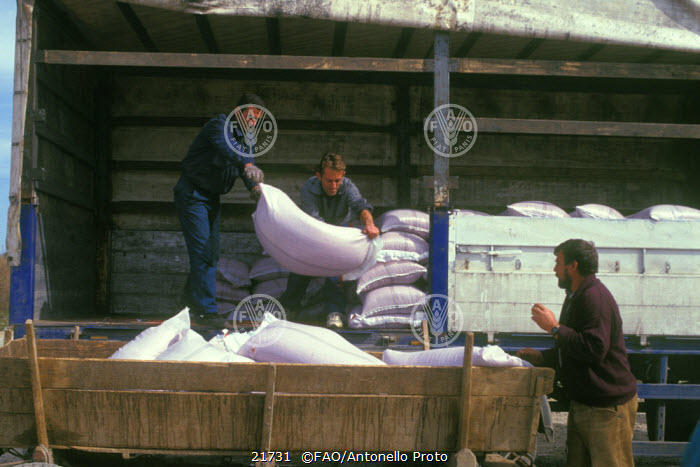 Original filename
21731.jpg
Country
SERBIA
Caption
A beneficiary receiving his quota of seeds. FAO coordinated the distribution of seeds and fertilizer through several international non-governmental organizations, targeting 70 000 families all over the country. The distribution of seeds was the first step for farming families in Kosovo to become self-sufficient again; each farmer had the right to receive six sacks of wheat seeds, enough to plant one hectare of land. - - FAO Emergency Relief Project for the Balkans. A USD 6.7 million emergency relief project for the distribution of seeds and fertilizers in the Kosovo province of the Federal Republic of Yugoslavia was coordinated by the Food and Agriculture Organization of the United Nations (FAO). Approximately 14 500 metric tonnes of winter wheat seeds and 9 000 mt of fertilizers were handed out to more than 70 000 farming families in the Balkans. The planted area in the 1999/2000 winter season estimated at about 70 000 hectares, of which 46% comes from relief inputs.

The main problems facing Kosovo farmers are lack of shelter and land inaccessibility. Many of their houses were destroyed and much of their land has been mined; agricultural productivity has thus been sharply reduced. The distribution of seeds and fertilizers was channelled through several international non-governmental organizations and major donors were the United States of America, Sweden, the Netherlands, Luxembourg and Finland.
Photo Credit
© FAO/Antonello Proto
Category
Handling, transport, storage and protection of agricultural products
Part of