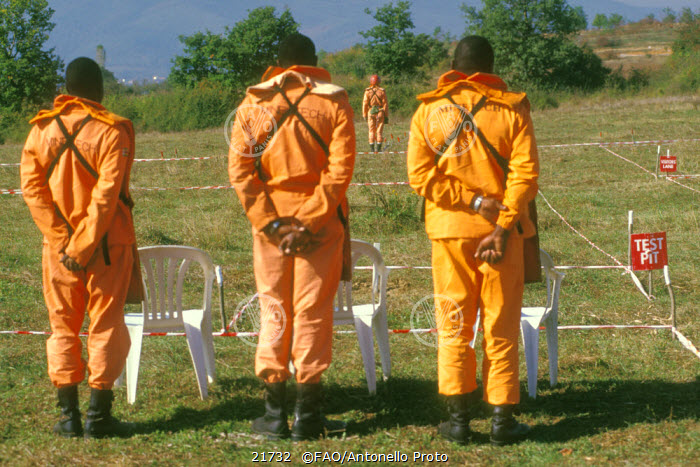 Original filename
21732.jpg
Country
SERBIA
Caption
A group of de-miners from one of the 17 de-mining teams in Kosovo. To give farmers access to their land and help them to return to normal agricultural production, de-miners have cleared 44 villagers, over 7 000 houses and an area of nearly 100 000 m2; however, the work is painstakingly slow and precise and requires great concentration. - - FAO Emergency Relief Project for the Balkans. A USD 6.7 million emergency relief project for the distribution of seeds and fertilizers in the Kosovo province of the Federal Republic of Yugoslavia was coordinated by the Food and Agriculture Organization of the United Nations (FAO). Approximately 14 500 metric tonnes of winter wheat seeds and 9 000 mt of fertilizers were handed out to more than 70 000 farming families in the Balkans. The planted area in the 1999/2000 winter season estimated at about 70 000 hectares, of which 46% comes from relief inputs.