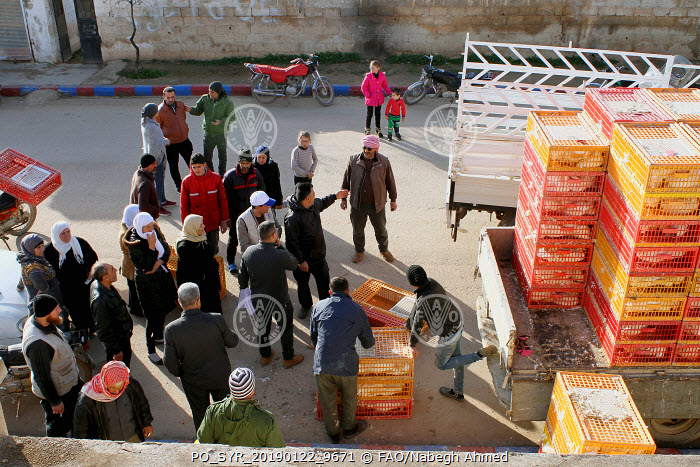 Original filename
PO_SYR_20190122_9671.jpg
Country
SYRIAN ARAB REPUBLIC
Caption
Al Salameyah - Hama Governorate - 22 January 2019, FAO has reached 200 women headed-households with poultry package that contains 20 Hens, 200 kg fodder, 2 drinking pots and 2 feed pots, to secure them with a source of nutritious food and to have an additional source of income for the family.
Improving Health and Livelihood of Women through Empowering Vulnerable Crisis Affected Households:
A joint project between FAO and UNFPA in Syria, supported by KOICA, to reach 1,200 women headed-households with agricultural production kits to increase their contribution to household food, income and livelihoods. The intervention was implemented in three governorates, mainly Homs, Hama and Lattakia, which hosts large numbers of internally displaced persons (IDPs), who have been displaced from crisis-affected areas and have moved from poorer regions in search of economic opportunity. The joint project's goal is to strengthening the resilience of crisis affected women by improving their livelihoods, besides providing access to sexual and reproductive health (SRH) and to live a life free from all forms of violence and discrimination.
Photo Credit
© FAO/Nabegh Ahmed
Part of