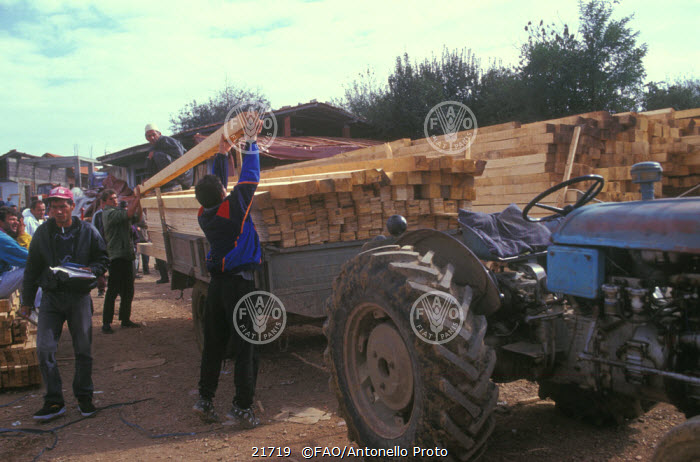 Original filename
21719.jpg
Country
SERBIA
Caption
Distribution of wood for 16 villages heavily destroyed by Serbian bombing during the recent civil war. The wood, which was very good quality, came from Scotland and Norway and there was also free distribution of bricks and sheeting to aid families in need before the harsh winter begins. The main problem for Kosovo farmers is finding shelter as most rural houses were destroyed in the conflict so the wood will be used to repair their homes. - - FAO Emergency Relief Project for the Balkans. A USD 6.7 million emergency relief project for the distribution of seeds and fertilizers in the Kosovo province of the Federal Republic of Yugoslavia was coordinated by the Food and Agriculture Organization of the United Nations (FAO). Approximately 14 500 metric tonnes of winter wheat seeds and 9 000 mt of fertilizers were handed out to more than 70 000 farming families in the Balkans. The planted area in the 1999/2000 winter season estimated at about 70 000 hectares, of which 46% comes from relief inputs.