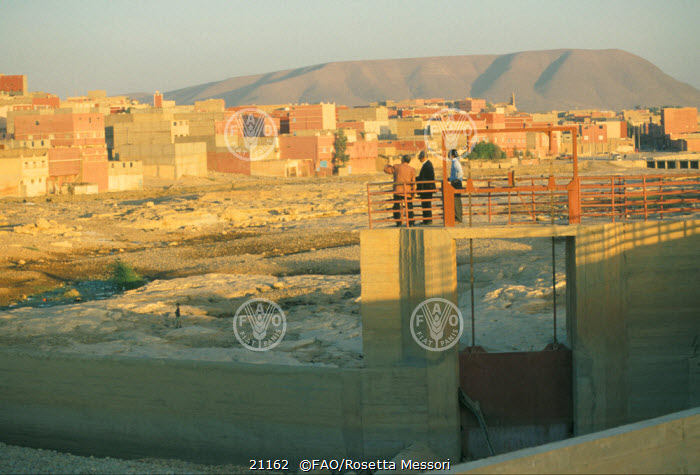 Original filename
21162.jpg
Country
MOROCCO
Caption
D'Oum Laachar dam in the dry season at Guelmin. In the rainy season it is inundated with water, which is channelled off to surrounding fields to irrigate the land. - - Use of Floodwater to Restore Irrigation Systems: GCP/MOR/012/ITA. The Government of Morocco has undertaken a vast programme to relaunch agriculture in the south of Morocco after this area was affected by drought at the beginning of the last decade. The rural population was particularly hit as cereal production declined, livestock were reduced and small farmers suffered. To resolve this situation the Government of Morocco decided to concentrate all means at its disposition towards a single course of action: restoring irrigation systems by spreading out and re-channelling flood water in the arid and semi-arid areas in an attempt to fight desertification.

The project is financed by the Government of Italy and executed by the Food and Agriculture Organization of the United Nations (FAO). FAO supplies technical assistance and various means to carry out the project.
Photo Credit
© FAO/Rosetta Messori
Part of