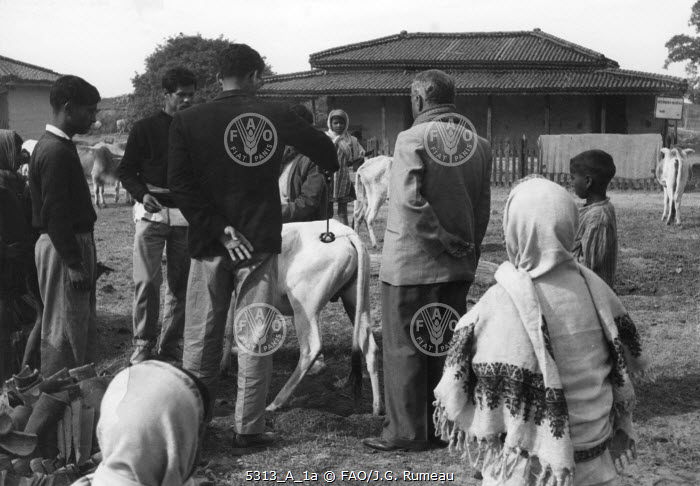 Original filename
5313_A_1a.JPG
Country
NEPAL
Caption
FAO/OXFAM Project on Rinderpest Vaccination Campaign. Dr. C. Seetharaman (India), FAO veterinary expert in Nepal, watches the branding of a young bull which has just been vaccinated against rinderpest in a village of the Terai plains.
Basdilawa (Terai Plains), Nepal, December 1964. The Food and Agriculture Organization of the United Nations (FAO) has recently started to assist the Government of Nepal in a rinderpest vaccination campaign project, financed by the Oxford Committee for Famine Relief under the Freedom from Hunger Campaign. The project aims at the eradication of rinderpest which is regarded as the major hazard to cattle and buffalo husbandry in Nepal; each year it takes a considerable toll of these animals, thus paralysing transport through shortage of draft animals, ploughing and threshing of cereals, milk production et. One expert and a considerable amount of vaccination equipment and transport have been provided under this project.
Photo Credit
© FAO/J.G. Rumeau
Part of