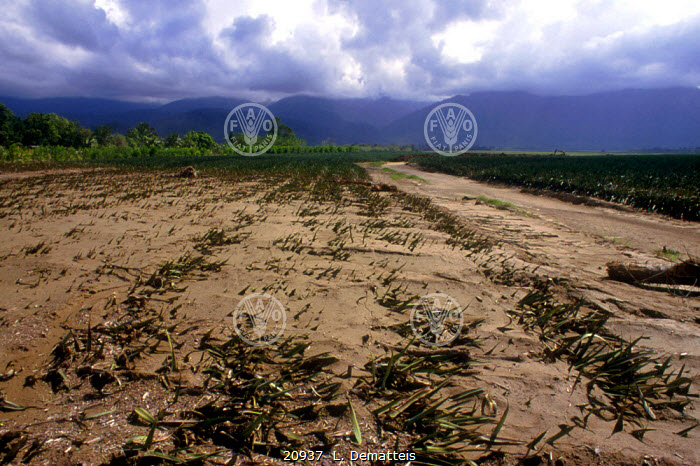 Original filename
20937.jpg
Country
HONDURAS
Caption
Pineapple field destroyed by mud and sand in the wake of flooding caused by Hurricane Mitch. - - General: General. A tragedy of immense proportions afflicted the four Central American countries of Honduras, Nicaragua, Guatemala and El Salvador. The irreparable loss of life and damage to infrastructure, agricultural production, and industrial and commercial entities has meant that over twenty years of development and investment has been virtually wiped out. Over three million persons have been directly affected as a consequence of Hurricane Mitch that ripped through the region during the month of October 1998. Honduras and Nicaragua, two of the poorest countries in the hemisphere, in particular, were seriously damaged where the hurricane and accompanying floods and mudslides have affected their entire territories.

Estimated are that 70% of agricultural production in Honduras was destroyed, amounting to about USD 800 million. Twenty percent of the expected coffee production was lost, as well as large amounts of bean crops, bananas, oil palms and citrus. In particular, the production and export of bananas, a main hard currency earner for Honduras totally disappeared. This had serious consequences for the financial position of the country and brought about the sudden loss of jobs of over 18 000 workers. Moreover, 60% of all infrastructure was destroyed or severely damaged, at least 100 000 houses were damaged and water distribution systems in most cities were also da
Photo Credit
© FAO/Lou Dematteis
Part of