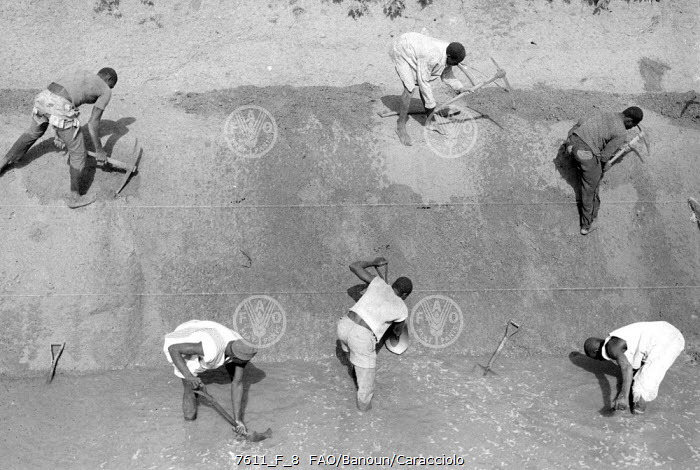 Original filename
7611_F_8.jpg
Country
BURKINA FASO
Caption
Settlement in the Kou Valley, Upper Volta, 1970 - The Government is giving high priority to the expansion of rice cultivation in its four-year development plan. One of several land reclamation in operation in the Kou Valley, in the district of Bobo-Dioulasso, where 1800 families are being encouraged to resettle from over-populated areas. The project location comprises 1260 hectares and is abundant in water for irrigation. Preliminary studies on soil suitability were carried out by Chinese (Taiwan) specialists who are supervising the building of irrigation works and will also instruct the newly settled farmers in irrigated rice growing. UN/FAO World Food Programme is supplying a weekly ration of maize, condensed milk, canned fish, butter oil and sugar to each farmer and his family over a period of five years ending in 1972. Food aid, besides being an incentive for settlers to move into the area, will encourage them to build houses and community buildings and also help support them until such time as they can produce enough food for themselves. The total cost to WFP will be $2,2 million.
Working on the sides of a new irrigation canal, 11Kms in lenght.
Photo Credit
© FAO/Banoun/Caracciolo
Part of