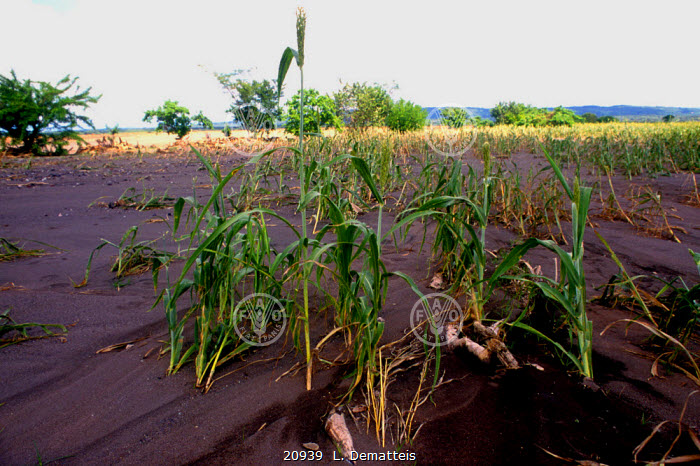 Original filename
20939.jpg
Country
NICARAGUA
Caption
Sorghum crop destroyed by mud left by flooding caused by Hurricane Mitch. Approximately 60% of the sorghum crop was lost. - - General: General. A tragedy of immense proportions afflicted the four Central American countries of Honduras, Nicaragua, Guatemala and El Salvador. The irreparable loss of life and damage to infrastructure, agricultural production, and industrial and commercial entities has meant that over twenty years of development and investment has been virtually wiped out. Over three million persons have been directly affected as a consequence of Hurricane Mitch that ripped through the region during the month of October 1998. Honduras and Nicaragua, two of the poorest countries in the hemisphere, in particular, were seriously damaged, where the hurricane and accompanying floods and mudslides have affected their entire territories.

Initial estimates indicate that at least USD 52 million was lost among small farmers alone. FAO estimated that 50% of total agricultural production was lost. Food crops such as beans, maize, sorghum, bananas and sugar cane were most affected. Highways, roads, bridges and houses were also damaged or destroyed with total losses in infrastructure and production being about USD 1 billion.
Photo Credit
© FAO/Lou Dematteis
Part of