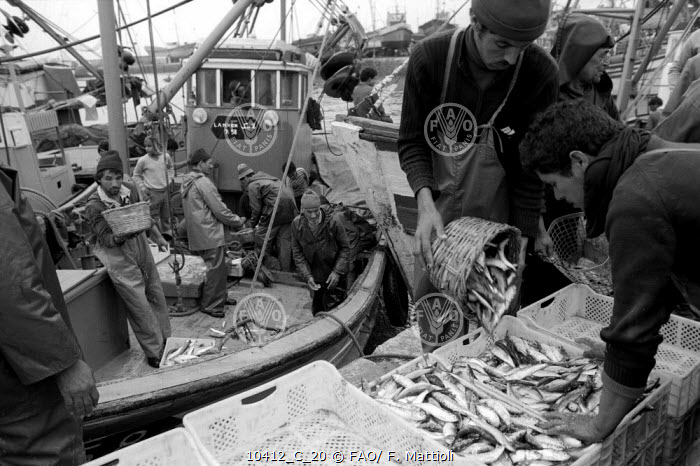 Original filename
10412_C_20.jpg
Country
MOROCCO
Caption
WEST AFRICA FISHERIES - MOROCCO, 1980
Tho Food and Agriculture Organization of the UN (FAO) has launched a
special programme for the development and management of fisheries in
200-mile exclusive economic zones (EEZ)) of developing coastal states.
In West Af'rica these include Morocco, Senegal and Ghana, some of the
laading fishery nations in the region. West Africa, from Morocco to
Zaire, is served by FAO's Committee for Eastern Atlantic Fisheries
(CECAF), based in Dakar and funded by UNDP. One of CECAF?s continuing
tasks has been to harmonize fishery statistics and to provide technical
guidance in evaluating fish stocks for more rational exploitation. Most
of the region's total catch of about 3,1 million tons had previously
bean caught by foreign vessels, mainly from the USSR, Poland, Spain
Republic of Korea and France. With the establishment of EEZ's, the
foreign share of the catch has dropped, especially the Soviet catch
while that of local countries has increased in overall terms.
A catch of sardinella and mackerel is unloaded from the hold of a
purse seine vessel in wicker baskets which are passed along a "human
chain" and emptied into crates stacked on the quay of Essaouira, a
fishing port south of Casablanca.
Photo Credit
© FAO/Franco Mattioli
Part of