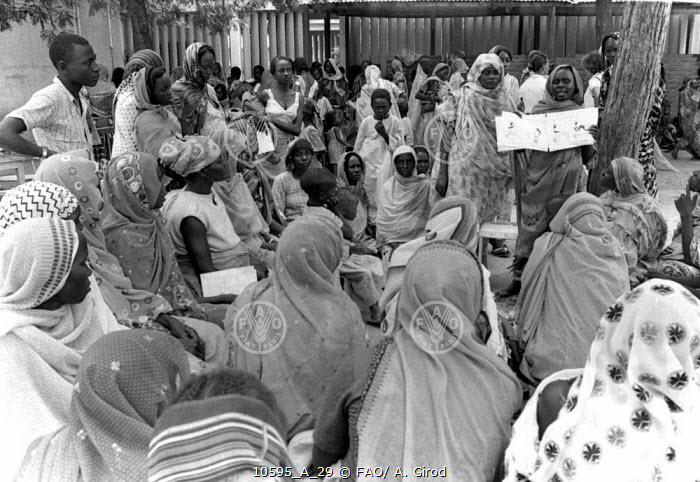 Original filename
10595_A_29.jpg
Country
CHAD
Caption
WFP FEEDING OF VULNERABLE GROUPS AND ASSISTANCE TO DROUGHT REHABILITATION,
Chad, 1981. Chad, ravaged by recurring droughts since 1967, has more
recently been afflicted by civil war and political disturbances and now
faces severe food shortages and malnutrition. Thousands of returning
refugees, who fled the country during hostilities, must be cared for, and
the UN World Food Programme (WFP), in cooperation with the UN High Commission
for Refugees and US ?CARE", has authorized emergency operations. The most
vulnerable groups (expectant mothers and their small children) are now
receiving extra food at social centres. WFP supplies are used to make
nourishing meals for those most urgently in need of food, numbering as many
as 150,000 by the end of 1981. WFP is also assisting villagers in carrying
out drought rehabilitation works.
Basic health education is given at a Mother and Child Health Centre.
Photo Credit
© FAO/A. Girod
Part of